Why Heroku and AWS have failed to serve modern developers?

Heroku Vs. AWS remains a long and persistent debate among developers. Both platforms have strengths and weaknesses.

Over the last 10 years, Heroku and AWS played a huge role in the cloud hosting and software development industry, by significantly unlocking productivity in a way that it has never been reached before. They are the platforms behind most of the successes from the last decade. 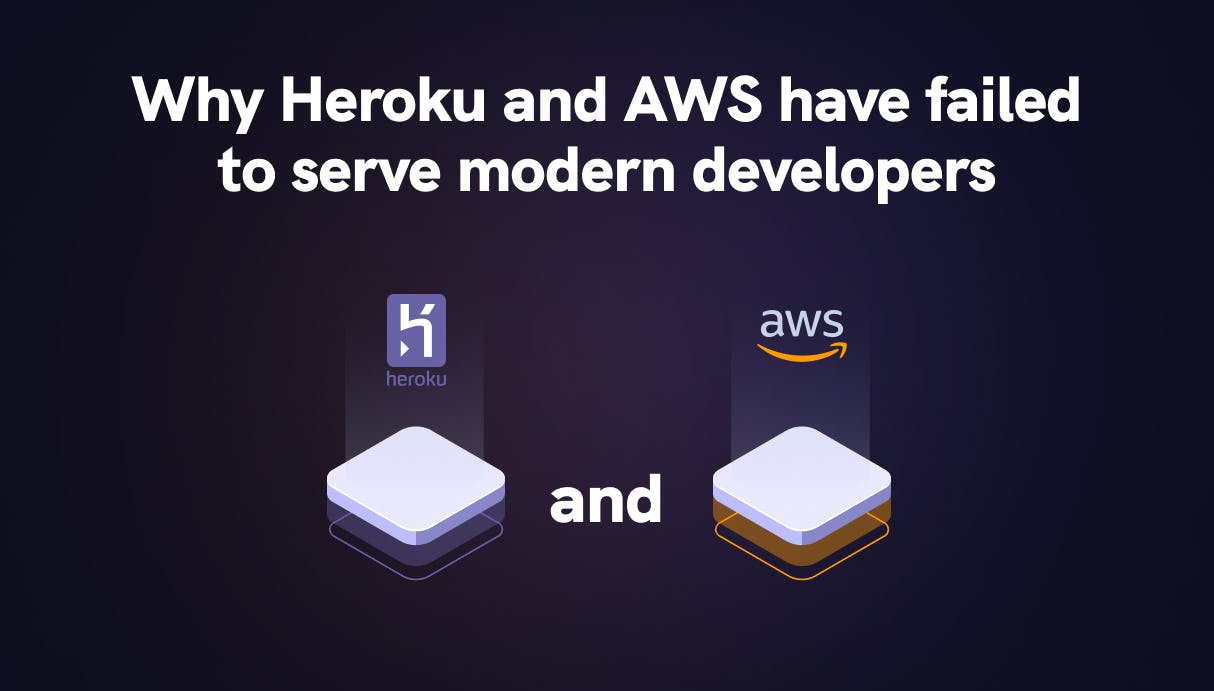 By using Heroku, developers benefit from a great developer experience to deploy their apps; at the price of flexibility, control over the infrastructure (no fine-tuning for your DB), and going beyond what Heroku allows (static IPs and VPC for Enterprise plan only, no private subnet, only 2 regions,... ).

Wherewith AWS, you will benefit from the full flexibility, powerful infrastructure capabilities, and tons of great services; but at the price of dealing with all the over-complexity of their services. Have you ever tried to simply deploy a simple app? - you will need to set up a VPC, a load balancer, a security group, a container registry, etc... until you maybe succeed to deploy your app. Otherwise good luck!

At the same time, for years now, I am seeing a new generation of developers and CTOs emerging. Those people are building services that you use every day and want to keep focusing on what they are building without compromising on using the best services that service cloud providers like AWS can provide.

Over the past 12 months, I’ve talked with 350+ CTOs & Developers from the US, Europe, and Asia to better understand how do they work on Heroku and AWS and what they expected from them. In this article, I’ll share (i) the most common challenges this new generation faces, and (ii) what do they need.

The 3 main challenges modern developers are facing in 2022

I will describe each challenge scenario with a real quote from the CTOs and developers we met.

Challenge 1. As the company grows, developers move out from Heroku limitations to AWS but run into complexity

Initially, we were on Heroku and started to have some issues with the proximity of Heroku services (not available in the south Pacific). We had to switch to AWS to overcome these Heroku limitations but it is starting to require more and more DevOps resources to manage our infrastructure — Nishant, CTO of My Muscle Chef

We are in the process of moving most of our apps to microservices and this is something that Heroku handles rather poorly. Overcoming these challenges means moving to an IaaS such as AWS but it requires resources and too much time (and knowledge) to set up and maintain — Teodoro, CTO of Greener

We are on Heroku since the start, for its simplicity. But we started facing some performance and costs issues so we consider switching to AWS, but it requires a significant effort (including DevOps resources and time) — Tech Lead at Hosman

We are micro services-oriented so we prioritize that architecture, but the hassle of managing infrastructure can be a lot. We don’t want to spend a lot of time on infrastructure but at the same time, we want to build in a way that will scale if it's a success — Kristof, Founder of Filerr

We needed better options for our budding business that can keep them in the cloud, allow us to scale and control costs, and still give them value by allowing our devs to strictly focus on dev. We are looking alternative to move our apps from Heroku to AWS — Luis, COO at Kauneonga

We are a brand new startup looking to finish developing our main features and deploy them before next week. We don't have DevOps/infra experts, and we don't have a lot of time to devote to these areas. We deployed the current version of our app on Heroku for the first time a few days ago, but we don't have much control over anything — Kevin, Head of Data Science at Finvault

We want our dev team to focus more on "dev" work rather than spending time trying to figure out AWS configs and how to set up different environments. We started to use Beanstalk but it remains still complex to manage and things are not working well (mainly the auto-scaling part) — Bodgan, CTO of Nifty Learning

Challenge 3. Keeping developers productive while the team is growing

Shortly after being acquired by a bigger company, our tech team grew x4 in 2 months. Now the team is bigger, we need to create new environments faster and easier — Alex, CTO of WeMoms

Maintaining our own full-stack preview environments is not worth the time for us. We are looking to find a DevOps solution like Vercel but hosted on our own Cloud and handles more than just frontend deployments. — Andreas, CTO of Flick

Modern developers need to stay focused on what makes their products unique.

Modern developers do not need to leave AWS.

Modern developers need to understand their bills and pay the right price.

Modern developers need more control and transparency on their infrastructure.

Modern developers need the simplicity of Heroku and the flexibility of AWS.

Are you a modern developer? Check out Qovery now!

ℹ️ Check out our articles on Heroku vs. AWS, which one to choose as a startup, and the 5 reasons why startups leave Heroku for AWS.