After a long summer break, the Qovery Demo day is back. 🌞 Our last Qovery Demo Day was live on Thursday, the 3rd of November.

This event aims to give you insights into what we did during the past month and what’s next and showcase some of our new features.

During this demo day, Romaric (CEO at Qovery) and Alessandro (Lead Product Manager at Qovery) joined me to talk about RBAC, Containers and Deploying Jobs and here is the recap. 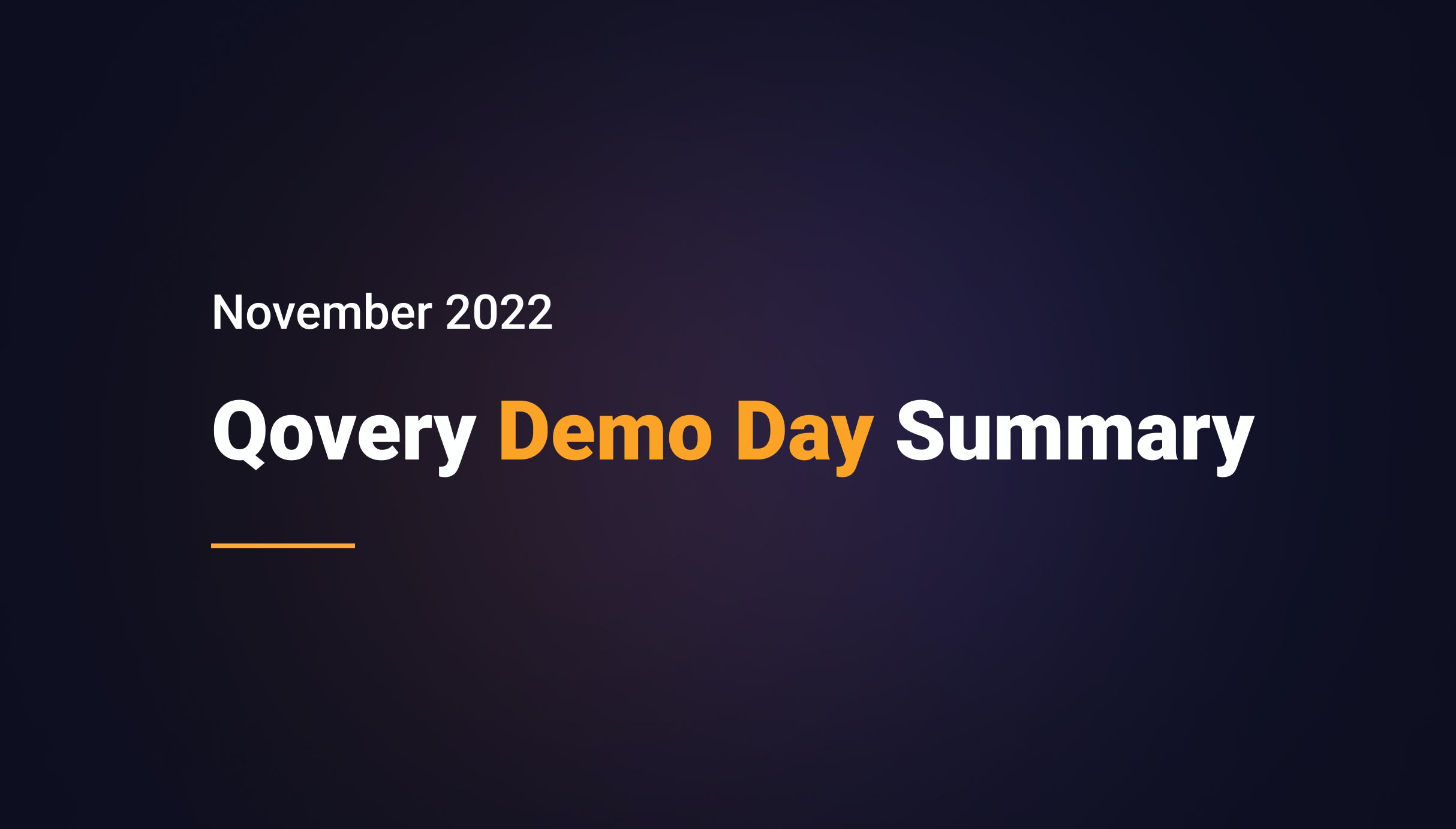 10min: What we worked on last month

Today, developers’ teams need to be more autonomous to deliver new features rapidly. However, providing access to infrastructure without sufficient control results in IT waste, including costly cloud security breaches and skyrocketing infrastructure costs. It is not acceptable for most organizations, especially in highly regulated industries.

That’s where Qovery comes to the rescue!

Qovery is an Environment as a Service platform that empowers developers to test and release features faster with on-demand environments - in your cloud and in less than 30 minutes. Qovery is open-source, leverages Kubernetes, and the managed service of each cloud provider is supported.

What we worked on last month

The last quarter of the year is always the one where you want to finalize essential features, and improve your product, even more to make it as smooth as possible, and so far, we are keeping our promises:

First, if you followed our last Demo Day, which was at the beginning of the summer, you probably saw the interview we did with Benjamin, Frontend Engineer at Qovery, talking about the V3 console; well, after a hard summer of work, the console V3 is finally in Beta testing.

I highly recommend you try it out if you haven’t yet. We created this V3 to Smooth the user journey and give you more transparency with much more insight into your infrastructure; this includes usage and cost. We also added the advanced settings straight into the V3 console.

When we launched the console V3 in Beta, there were some missing parts, including the database creation flow; it is now ready as well, so you can set up your database directly from the V3 without going back and forth with the V3.

But that’s not all because you can also change the General Settings and the Resources of your Database on the V3, head to your Database, and then click on Settings.

While you could already Cancel an environment building in the case where you launch an unwanted deployment such as setting error, the wrong commit deployed, etc.). You want to cancel the deployment after the build rather than wait for the action to be completed and then perform a rollback as it can be time-consuming; well, it is now possible!

Here is a short video to show you how fast it is to Cancel a Deployment while building (it also works after the build); if you want to take a deeper look, here is our documentation.

RBAC and Container Demo By Romaric

Romaric made a great demo on the V3 console showing how and why you should use RBAC and Containers.

Why Use Container Instead of Application?

If you already use a CI system and have pushed your container images into your container registry, you might want to use those images and avoid rebuilding them. This is where deploying a container is useful.

Deploying an application is 4 steps - Qovery clones your Git Repository, builds your container image, pushes it into a private container registry, and deploys it.

We have plenty of feature and improvement to come, this include:

To see how is the status of what’s next, I really encourage you to take a look at our public Roadmap that we update as often as possible, you can also vote for feature that you would like to see and even summit some ideas.

One particular feature that has been wildly expected and that we are finally developing is Deploying Jobs.

There are two main use cases that we will cover with this implementation:

Located on the V3 interface, there will be a new service within your environment, and you will be able to deploy the Cronjob from the URL or Container Registry; you will also be able to schedule the execution of your job and last but not least: follow the execution of the job within the Kubernetes cluster.

The job will be executed on your cluster as any other application we manage.

For the second use case, we are building the blocks that we will use to let you extend the core functionalities and empower your teams.

It will let you manage any resource we don’t cover today, like running jobs linked to the lifecycle of your environment.

It will allow you to:

We thank you again for joining us at this Demo Day and for your trust because our product, team, and vision would not be possible without your support.

If you have any questions, don’t hesitate to contact us on discord or directly on the chat from our Forum, and we’ll see you for the next Qovery Demo Day. 💜

If you want to see the replay of our live event, it’s happening right below 👇🏻

Our last Qovery Demo Day was live on Thursday, 23rd of June. This event aims to give you insights into what we did during the past month and what’s next and showcase some of our new features. During this demo day, Romaric (CEO at Qovery) and Benjamin (Software Engineer at Qovery) joined me to talk about Qovery EC2 and our brand new V3 console. - Read more 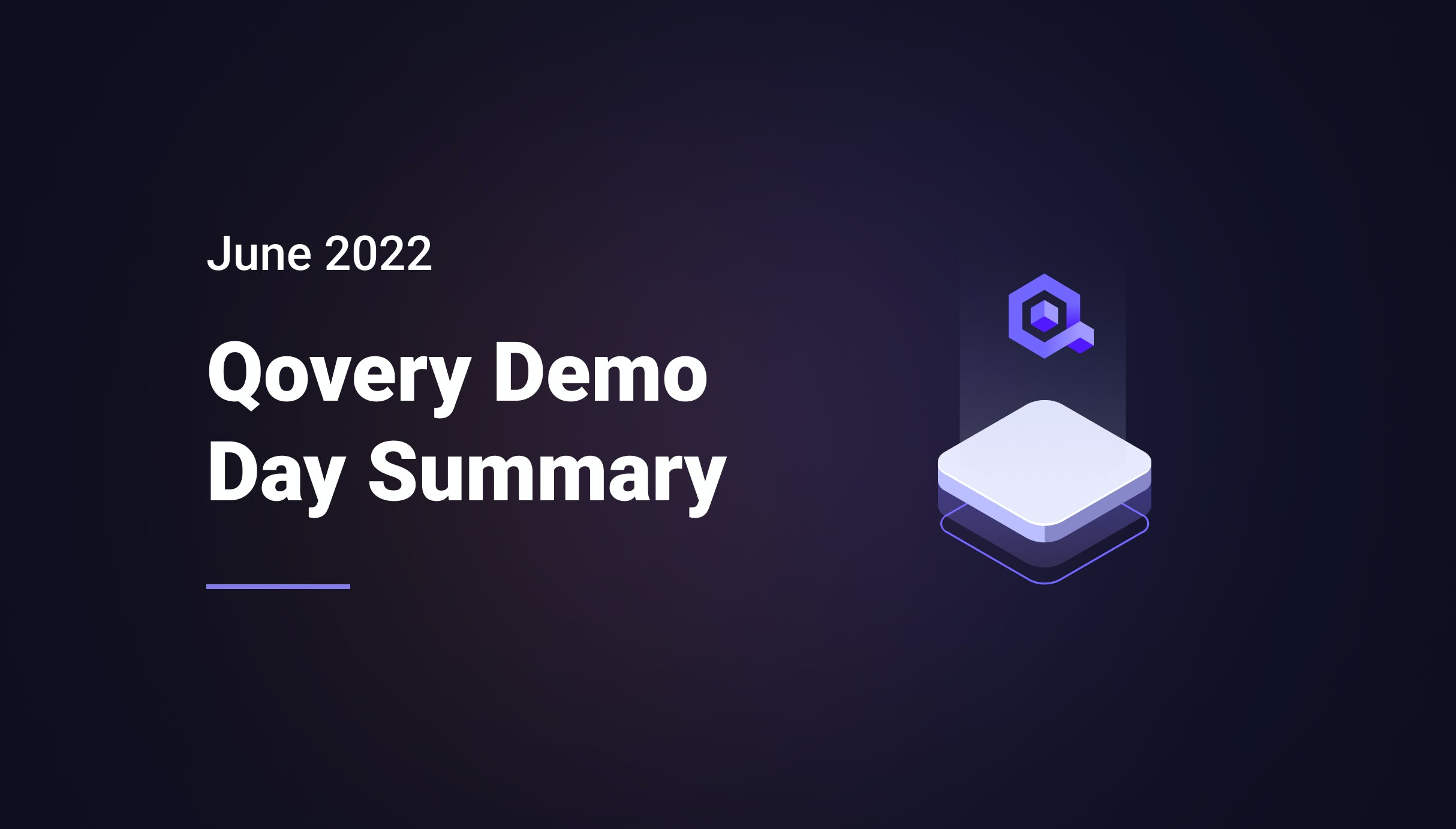