How To Use Buildpacks To Run Containers

The high demand to deliver software that is both highly available and able to meet customer requests has, in part, led to the adoption of microservice architecture, a software architecture pattern that makes it easier to deploy applications as self-contained entities called containers. These containers are nothing but processes that run as long as the application in them is running. This has made containerization the de facto standard for deploying applications and has brought about the development of several new tools and technologies like Kubernetes and Service Mesh. 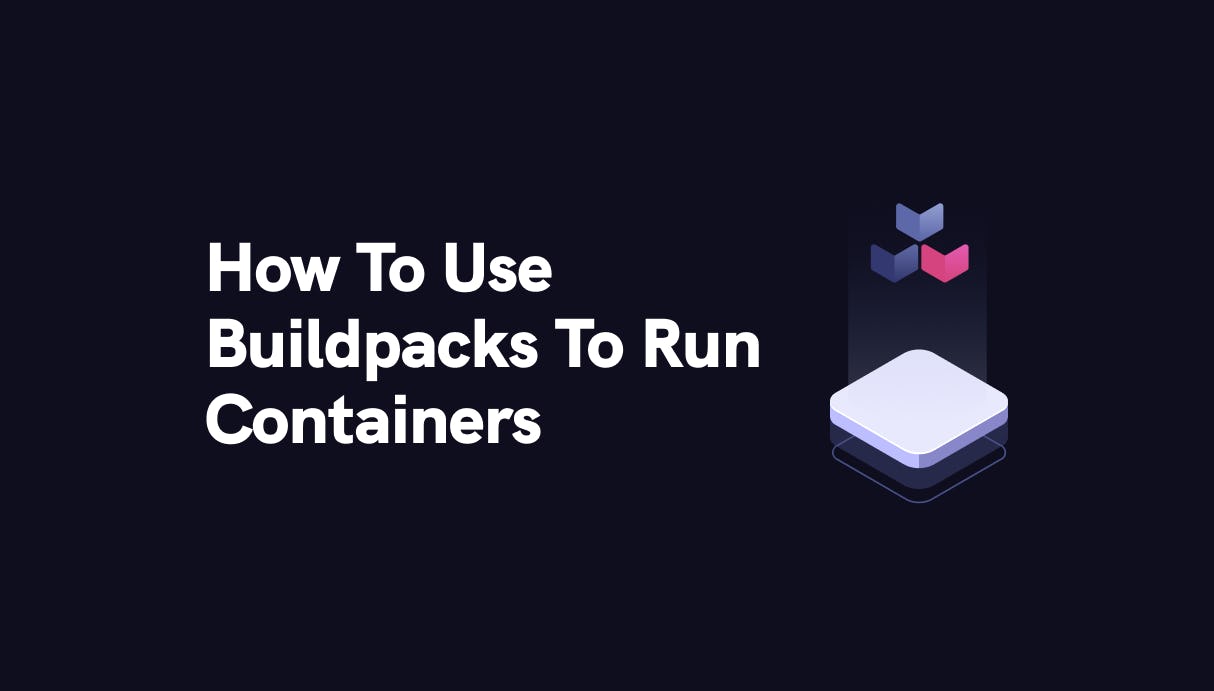 As more development teams move towards the microservice architecture, they need a way to continuously build and deploy their container images without worrying too much about issues like configuration, upstream dependency management or caching. This is where buildpacks come in. A buildpack is a program that turns source code into a runnable container image without precisely defining the steps, as in the case of Dockerfiles. Instead, it detects the language and converts the source code into a runnable container image. There are buildpacks for Ruby, Go, Node.js, Java, Python, and more.

In this article, you will learn more about what buildpacks are, their various functions and features, and how to use them to convert a Node.js application into a runnable container image.

Put a buildpack is a program that makes converting source code into a runnable container image. The process of identification and conversion usually goes through two stages:

One of the core strengths of buildpacks is auto-detection. Buildpacks can build application images directly from the source code without additional instructions. This happens because buildpacks can look for indicators in the source code during the Detect stage and then build a runnable container image from there. This can significantly improve the developer experience and productivity as development teams don't have to worry themselves with tasks like creating Dockerfiles, specifying instructions on how to build images, implementing caching, or concentrating on the security of the application image.

Paketo, one of the buildpack technologies available in the market today, has a dedicated development team tasked with building automated tools that continuously monitor and update upstream dependencies and new features. This removes the burden from users as they don't have to be on top of the new features, bug fixes, and vulnerability alerts for all of these dependencies.

A builder is an image that is usually made up of all the components necessary to perform a build. These components include:

Heroku was the originator of the buildpack idea, though other companies like Cloud Foundry and Google have integrated buildpacks into their product offering. In January 2018, Pivotal partnered with Heroku to create the Cloud Native Buildpack, which focuses majorly on embracing modern container standards and practices, such as the OCI image format. The Cloud Native Buildpack specification also takes advantage of the latest capabilities of the container standards and practices. The project was accepted into CNCF later that year in October 2018.

In this tutorial, you will implement a buildpack for a Node.js application using Paketo Buildpacks, which is a community-driven and open-source project. The Paketo project is backed by the Cloud Foundry Foundation, and the development team is sponsored by VMware. Under the hood, the Paketo Project implements the Cloud Native Buildpacks specification, which aims at building and unifying the buildpack ecosystems with a well-defined contract that incorporates knowledge gained from maintaining production-grade applications that use buildpacks.

Docker provides the platform to package your application into containers. To install Docker for your operating system, you can follow this guide.

The Pack CLI is available on Windows, Mac, and Linux. For Linux users, you can run it as a container. If you are on windows, you will need to download the pack zip file and extract the binary. You can find more information about installation for different platforms here.

Installing the CLI on Mac OS is as simple as running the command below:

You can make use of one of the sample Node.js applications available on the Paketo repository or use a custom application you've built to test.

Clone the Node.js application that uses NPM from the Paketo repository code samples and navigate to the NPM folder:

Then build the application by running the following command:

Above, paketo-demo-app is the name that will be given to the image after being built. The --buildpack flag is used to specify the buildpack to use—in this case, Node.js, although there are buildpacks for other languages as well. You can check them all out here. The --builder flag is used to specify the type of builder to use. There are also several types of builders: full, base, and tiny. You can read more about the types of builders here.

The application listens on port 8080 inside the container. You can run it by mapping it to a port on the host machine with Docker (i.e., port 9999):

To test the application, you can run:

This should return an HTML document:

Also, if you navigate to localhost:9999 on your browser, you should see something like this:

Buildpacks also provide Software Bills of Materials. This feature supplies a list of components in a software application, including version numbers, build identifiers, and other relevant information. It is an industry-standard mechanism for documenting metadata about dependencies in images or applications. The Pack CLI allows you to know what you have running in production as well as gain insights into your applications and their dependencies. Having an SBOM is one of the ways organizations can improve the security of their software supply chain.

To see the Bill of Materials (BOM) for your image, run this command:

Here, paketo-demo-app is the image name, and the --bom flag is used to generate the bill of materials. This command will list all the dependencies and metadata included in the application as well as the SHA for every binary in the build process, attaching that as "evidence." For example, the Paketo BOM for an image might look like this:

Buidpacks make it easier for development teams to deploy their applications without worrying about configuration. They increase developer productivity and ensure security by constantly checking changes in upstream dependencies and updating them as needed, without much intervention.

In this article, you have learned what Buildpacks are, the various types of builders you can use when developing your application with a Buildpack, generate a Software Bill of Materials for your images and applications and implement a Buildpack using Node.js and Paketo Buildpacks.