How to Scale your AWS Infrastructure - Part 1

When designing a solution, you should keep future needs in mind. If the number of users increases dramatically in a short period of time, the solution should be scalable enough to handle the new growth. Making systems scalable on cloud is relatively easier as compared to scaling on-premises infrastructure. AWS has provided excellent tools/services to enable your applications for as much scalability as you want. Note that scaling down is as important as scaling up because cost is important when designing for scalability.

In this two-part article, we will go through the tools and services provided by Amazon, which can help you scale your existing AWS infrastructure. Let’s go through these services and evaluate the benefits and business cases of each of these. 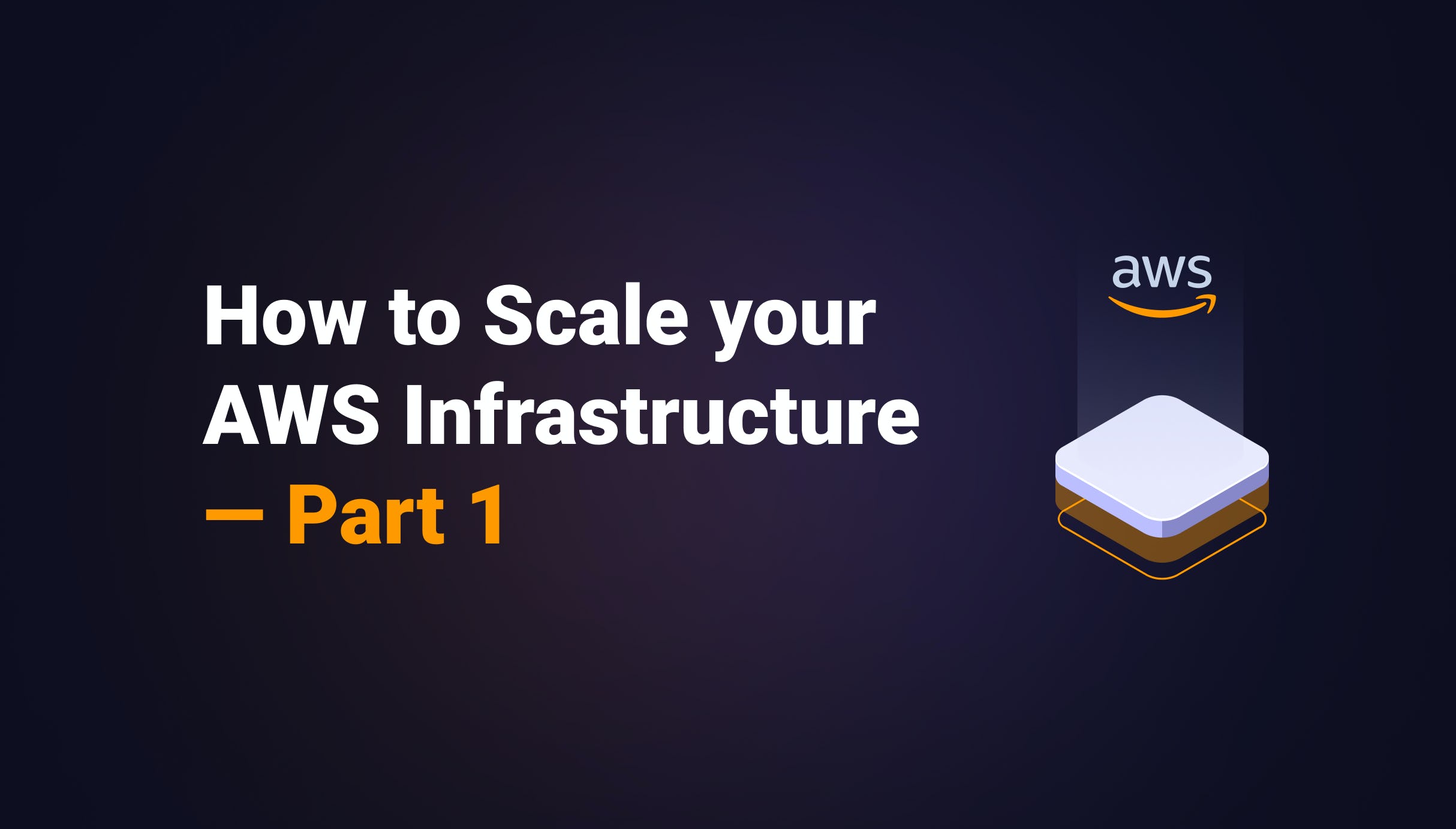 To scale vertically or horizontally is one of the decisions you face (or will face) every day. Regardless of the type of scaling, you need to ensure that the system design itself, is not a hindrance in scaling. Any memory leakage, technical debt etc., must be eliminated first; otherwise, scaling up or out will not solve the root cause.

Suppose you believe your application has followed the best programming practices and there is no technical debt. In that case, vertical scaling can be a quick solution, primarily if the infrastructure does not support the needs. However, horizontal scaling, especially auto-scaling, is usually a long-lasting solution in the long term.

Horizontal scaling (or scaling out) adds additional nodes or machines to your infrastructure to manage the new workload demand. It does add some complexity to the overall design but has numerous benefits like:

Elastic load balancer (ELB) is an AWS service that allows you to divide the load between your EC2 instances or Lambda functions. The most common type of ELB is the application load balancer, which is suited for HTTP/HTTPS traffic. It will take just a few minutes to set it up and balance the load between your EC2 instances, lambda, or even the docker containers. It supports the following AWS services:

AWS autoscaling automatically increases or decreases capacity based on load or other metrics. For example, if your memory usage is more than 90%, Amazon EC2 Auto Scaling can add a new instance dynamically. And as soon as the load is reduced back to normal, the total capacity will be back to its original position, e.g. one node only.

When do you need automation?

Image a scenario where you have to perform rapid deployments in a highly fast-paced environment many times a day. Doing it manually will not only waste time, but it is error-prone too. Not just the deployment, it applies to infrastructure too. Manually spinning up 200 servers is a cumbersome job and inefficient too. Automation is the solution to all these problems, whether it is deployment, infrastructure management, environment replication, etc. The more automated it is, the more scalable and less error-prone it is. Let’s look at the top areas where automation should be applied to achieve scalability.

Modern systems heavily use continuous Integration (CI) and Continuous Deployment (CD). In large projects, many developers are working on the same project.

Continuous Deployment is an integral part of scalable systems developed through agile methodology. It ensures you have a deployable system that can be tested and evaluated by stakeholders or at least QA-ready. Pipelines serve this purpose with simplicity. Many cloud vendors have built-in capability for CI/CD. You can get your build automatically created and deployed as soon as you push the code to code repository. A complete ecosystem also involves automated testing to ensure the newly created build passes all tests.

In this regard, some of the AWS services are Codepipeline, CodeBuild, CodeDeploy, etc.

When you have just 2 developers on a small project, testing the builds is easier and more manageable. Consider the same application grown to 250 developers and many dozen complex modules. Adding more QA team members to the project is very linear and not a practical approach. Take the example of Facebook, where more than 50,000 builds a day are created, just for android alone. No amount of manual testing can help that.

Automated testing is the solution to this problem. After integration with CI/CD, you can run automation tests on the build, and it will notify you if the build passes all the tests. If any of the tests fail, automatic rollback of the build can also be configured.

One of the notable services of AWS, which helps in testing automation, is AWS Device Farm. However, the most common tools used in automation testing include Jenkins, Selenium, etc.

As an application grows and gets more complex, its infrastructure needs to grow as well. Replicating the same infrastructure has always been a manual operation until we saw Infrastructure as Code (IaC). Through simple text files, you can configure all your infrastructure needs, whether your database, your container services, message queue, etc. Everything can be created automatically based on your configuration. With this technique, you can clone and replicate hundreds of servers easily and quickly.

For infrastructure automation, Cloud Formation is excellent service by AWS.

This was part one of the article. In the next part, we will continue this discussion with databases, loose coupling, CDN, Caching, etc. Continue Reading: How to Scale your AWS Infrastructure - Part 2

How to Scale your AWS Infrastructure - Part 2

Welcome to the second post in a series of “How to Scale your AWS Infrastructure”. In the first post, we talked about horizontal scaling, autoscaling, CI/CD, infrastructure automation, containerization, etc. In this post, we will continue the discussion around databases, loose coupling, caching, CDN, etc.  Let’s start the discussion with database scaling.   - Read more 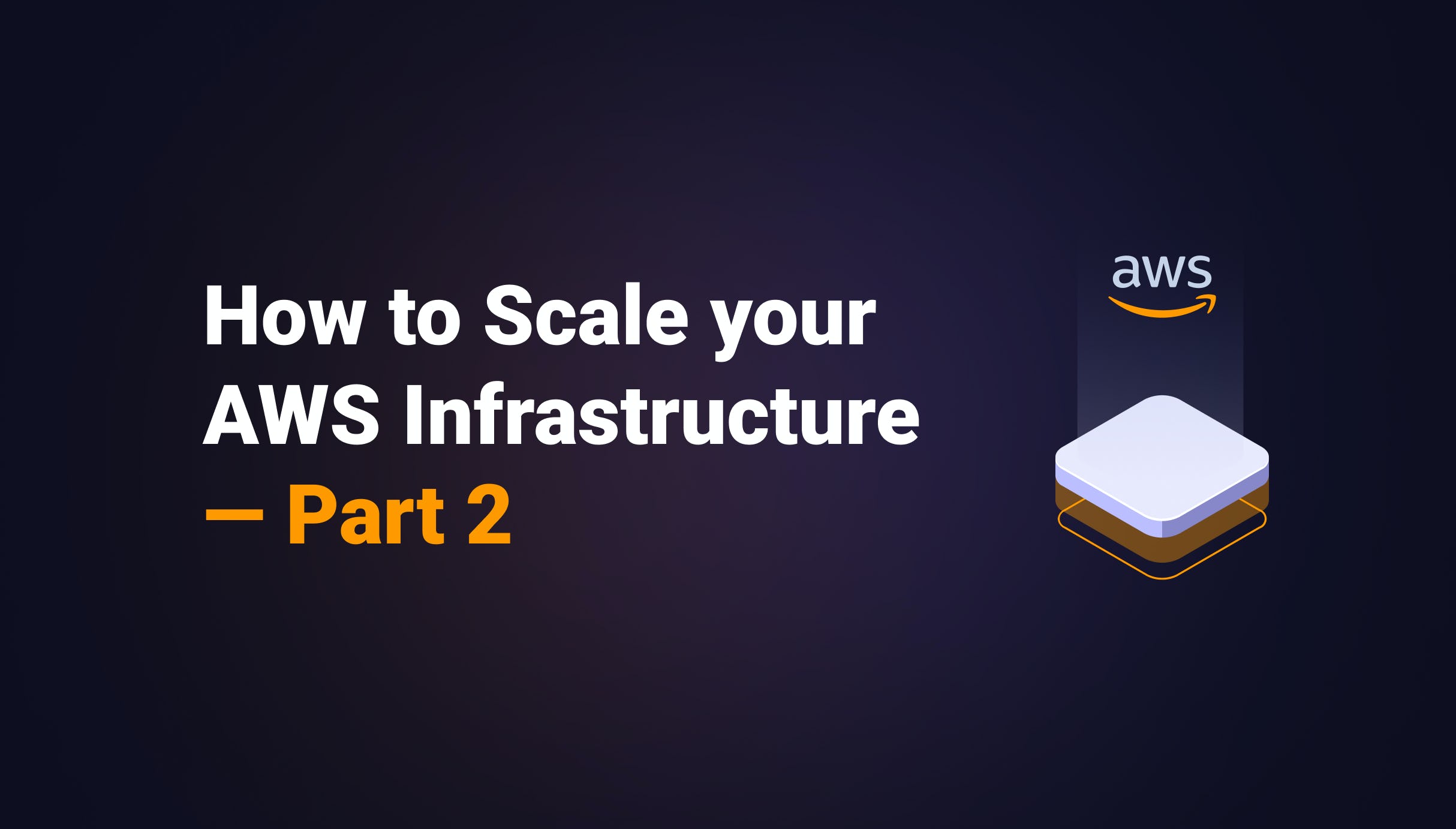 Suppose you've built a web application and started getting a few customers. After some feedback and iterations, you are ready with a product that people want. From now, your application is drawing attention to more and more users, with more and more requests per minute (RPM). Suddenly, a wave of new people use your app, and at one point, they can't use it anymore. While testing your app, you realize that it's working correctly. So what happened? You are simply facing a scalability problem. Your cloud architecture is probably not designed to scale with increasing load. When it comes to modern web apps, scalability is vital. A successful web application needs to perform well and be designed with scalability in mind, meaning to handle an increase in users and load without service disruptions (and then deliver a great experience to users, no matter how many they are). - Read more 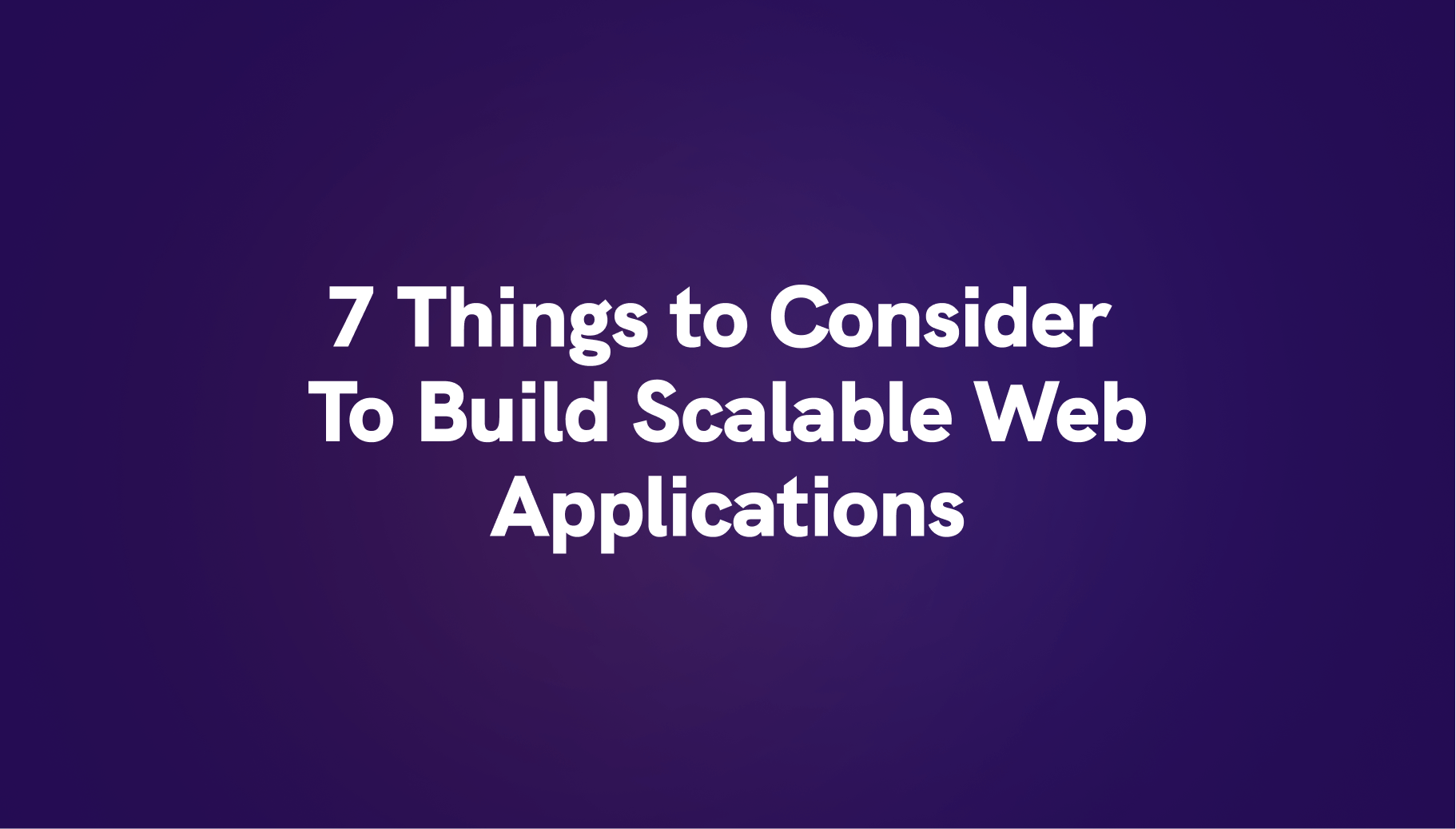 Do you need to manage hundreds of Kubernetes clusters, or are you just curious to know why you could potentially need more than two clusters, or do you want to see the magic behind it? You are in the right place because you’re about to learn everything there is to know about it. - Read more 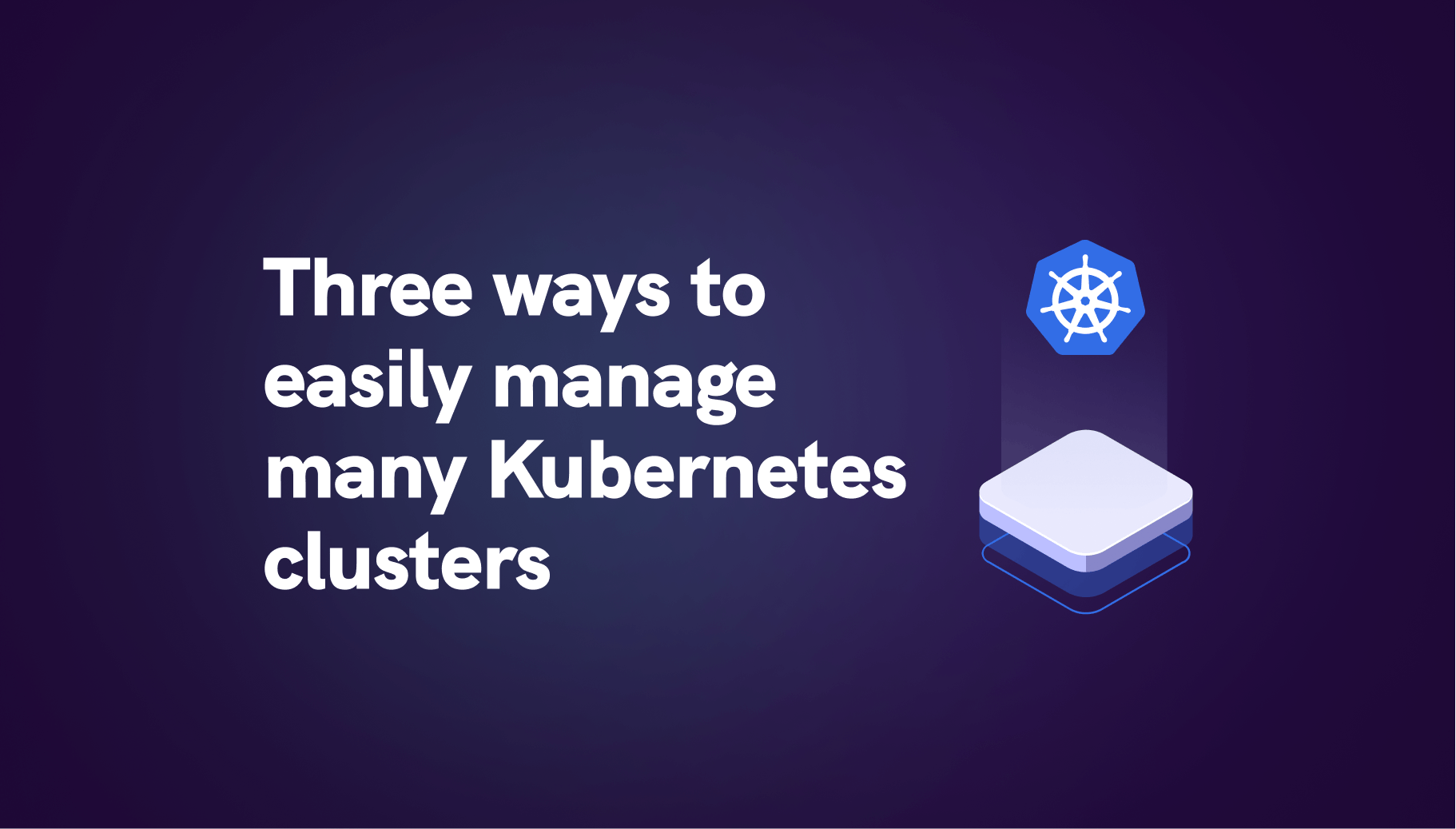