Best Practices and Tips for Writing a Dockerfile

Docker is a high-level virtualization platform that lets you package software as isolated units called containers. Containers are created from images that include everything needed to run the packaged workload, such as executable binaries and dependency libraries.

Images are defined in Dockerfiles. These resemble sequential scripts that are executed to assemble an image. Dockerfiles can include several kinds of instructions, such as RUN, to execute a command in the container’s file system, and COPY to add files from your host.

In this article, you’ll learn about the key characteristics of Dockerfiles and some best practices to be aware of when you’re writing your own Dockerfiles. Adhering to these guidelines helps you reap the benefits of the containerization movement while minimizing risks in terms of security and performance issues. 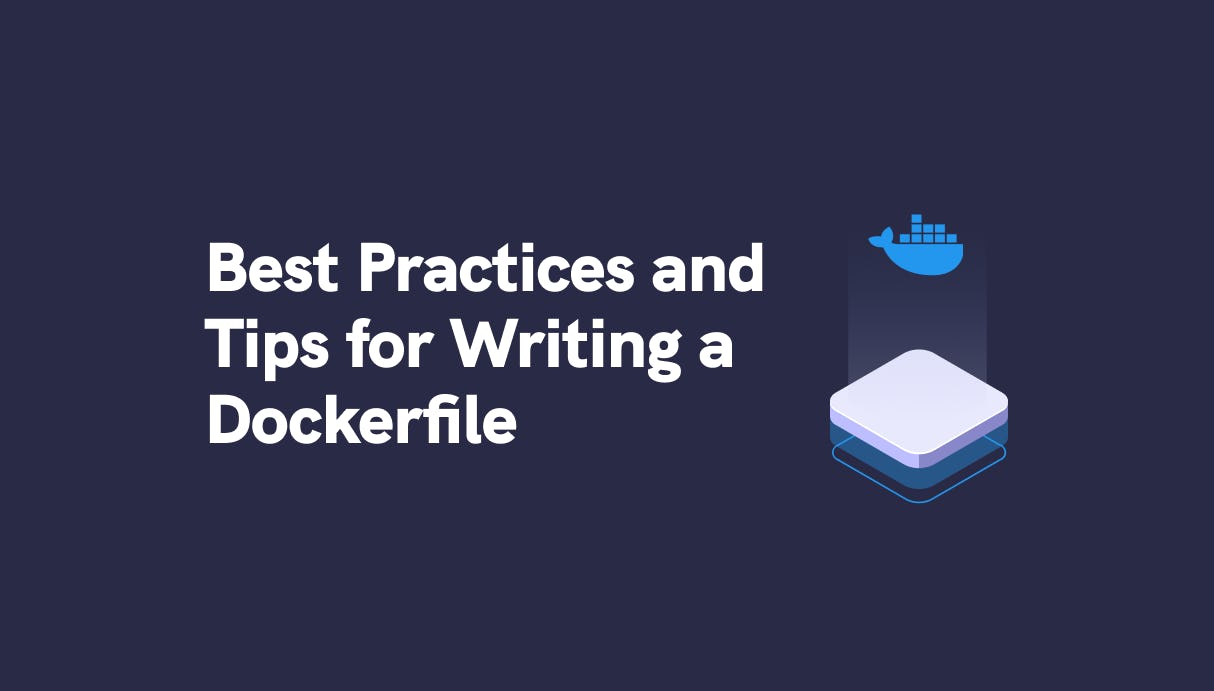 What Does a Dockerfile Do?

Dockerfiles are sets of instructions used to create a Docker image. The Dockerfile format is formalized by Docker and founded on a set of keywords that let you manipulate a container’s file system.

Each keyword is capitalized and followed by specific arguments:

Best Practices for Writing a Dockerfile

Writing your own Dockerfiles? Crafting a production-ready Dockerfile is a bit more involved than the minimal example shown above, but it shouldn’t be a daunting exercise. Here’s what you need to know to get the most from your image builds.

You can perform active scans of your Docker images to identify key vulnerabilities. Several tools are available, including Docker Scan, which is built into the Docker CLI.

Scans assess the operating system packages installed in the image and match them against known lists of Common Vulnerabilities and Exposures (CVEs). Suggested remediation steps are provided for each detected problem.

You should utilize a container scanning engine as a best-practice step to avoid issues slipping into production unseen. Add a scan to the image build stage of your CI pipeline to protect yourself from developers unwittingly adding risky packages to your image.

Docker images should be as minimal as possible. Streamlining your builds to include just the bare essentials makes for smaller image sizes, faster builds, and a reduced attack surface. You’ll also use less network bandwidth when transferring images to registries and hosting providers.

Don’t install any packages or libraries that your application doesn’t actually use. As you’ll rarely interact with running containers yourself, there’s no point in adding common CLI utilities on the off chance you might want them later. Maintaining this practice will help your Dockerfile stay focused on containerizing your application instead of an entire OS environment.

This is one of the most common and dangerous Dockerfile issues. It can be tempting to copy config files as part of your build. This is an anti-pattern that should be avoided.

Anything copied as part of your Dockerfile is baked into your image and accessible to anyone who can access it. If you add a file containing a database password, you’ve just exposed those secrets to all the users with access to your image registry.

Configuration keys and secret sensitive data must be supplied to individual containers, not the images they’re built from. Use environment variables, config files mounted into a volume, or Docker’s dedicated secrets mechanism to inject data when containers start. This avoids accidental information exposure and ensures your images are reusable across environments.

Run as a Non-Root User

The USER instruction directs Docker to run a container’s command as a specified non-root user. It accepts the name or ID of a user and group. All subsequent RUN, CMD, and ENTRYPOINT instructions in your Dockerfile will run as that account.

For even greater isolation, you can run the Docker daemon as a non-root user. This uses namespace remapping to completely avoid the use of the root on the host. Even if a process breaks out of your container, it won’t be able to fully compromise your machine. The rootless mode requires a special configuration and does not work with all Docker features.

Dockerfiles are text files that can change over time, so you should commit them to version control. Some organizations keep Dockerfiles in the same repository as their code, facilitating one git pull followed by a docker build to build the image, whereas others choose to use a separate repository. In the latter case, you’d need to pull the code repository separately before building your image.

Using version control lets you track, revert, and review the changes you make to your Dockerfile. You’ll have a useful starting point to debug issues if you build a new image and then find that it fails when deployed.

Docker containers should be ephemeral and completely stateless. Images need to define reproducible builds: the exact same image should be built each time you run docker build with a single Dockerfile. This is aided by specifying exact versions of the packages you install, as the latest, release, or even v1 could change significantly in the future.

Another trait of reproducible builds is the absence of side effects. Builds are meant to create containers, not to update data in your database, push artifacts into your CI system, or send you emails about progress. Those are all jobs to be performed in a separate stage in your pipeline.

Heeding these practices ensures that the image you built through docker build in a week will be the same as the one you built through docker build today. This makes it much easier to back up your data. Docker registries can quickly become large, but properly built images don’t necessarily need to be archived. If you do lose your registry, you’ll be able to quickly rebuild replicas of your images from the Dockerfiles in your source repositories.

It’s inevitable that some Dockerfile instructions will become long and unwieldy. This is especially true of RUN instructions that execute commands within your container. It’s best practice to combine as many commands as possible into a single RUN instruction as this helps facilitate layer caching. The drawback is having some very long lines in your Dockerfile.

To mitigate this issue, you should combine multiple lines with backslashes. This makes your Dockerfile easier to read so newcomers can quickly scan through the instructions. Docker suggests that you sort lines alphabetically; while this won’t be possible in all command sequences, it works well for lists of packages and other downloaded files.

Know the Difference Between CMD and ENTRYPOINT

The following pair of instructions results in date +%A running when the container is created:

Setting a custom ENTRYPOINT lets image users quickly access your CLI binaries without having to specify their full path. When you use docker run, Docker overrides the CMD but reuses the ENTRYPOINT:

The above command would start the container and run date +%B.

Use COPY Instead of ADD

Dockerfiles support two similar but subtly different instructions. ADD and COPY both let you add existing files to your image; whereas COPY only works with local files on your host, ADD also accepts remote URLs and automatically extracts tar archives. A simple ADD archive.tar has very different results from COPY archive.tar because the version using ADD will copy the contents of the archive, not the archive file itself.

Because ADD possesses this extra magic, it’s advisable to use COPY as your go-to when copying content from your file system. ADD creates unnecessary ambiguity, especially when referencing archive files, which means it should be reserved for use when it’s really needed. This helps you communicate your intentions to other contributors who might work with your Dockerfile.

You can build images without a Dockerfile. While not strictly a Dockerfile best practice, this technique is useful when you’re dynamically creating one-off utility images as part of a CI pipeline.

Use docker build - to have Docker accept a Dockerfile on stdin:

Dockerfiles are a set of instructions that Docker uses to build images. They provide a standardized, reproducible, and auditable mechanism for creating container images. While the syntax is simple, it’s important to keep common gotchas and best practices in mind so you don’t hit unexpected issues in production.

Keep your Dockerfiles as small as possible, actively scan them for security vulnerabilities, and ensure you’re not baking in secrets or config keys. These simple steps will ensure your Dockerfiles stay reusable, resilient, and secure against unintentional information disclosure.

When it’s time to launch your images into production, Qovery is a platform that can deploy your Dockerfile straight to AWS. Install the Qovery CLI, initialize a new project, and then push your code to your Git repository. Qovery will automatically launch your Dockerfile in the cloud, exposing the ports you’ve specified in your Dockerfile. This removes the burden of maintaining a Docker Engine installation on your own servers.